Although we can’t be sure exactly when the house was built, the deeds date back to 1827. The earliest reference we have found to the name ‘Bricklayers Arms’ is in the census return of 1871. This shows that it was occupied at that time by John Dunkley. He was aged twenty-nine and his occupation was shown as beer seller and ironworks labourer. The Census returns of 1881 and 1891 both refer to John Dunkley, beer seller, although neither specifically mention the name ‘Bricklayers Arms’.

The earliest recorded memory of the pub was from Bob Browning (1892-1997). Bob recalled that it was run in the early 1900s by Tom Dunkley. He told me that Tom Dunkley was the son of William Dunkley who ran ‘The Boat’ opposite. Tom Dunkley apparently died by drowning in the canal.

The Bricklayers Arms in the 1930s 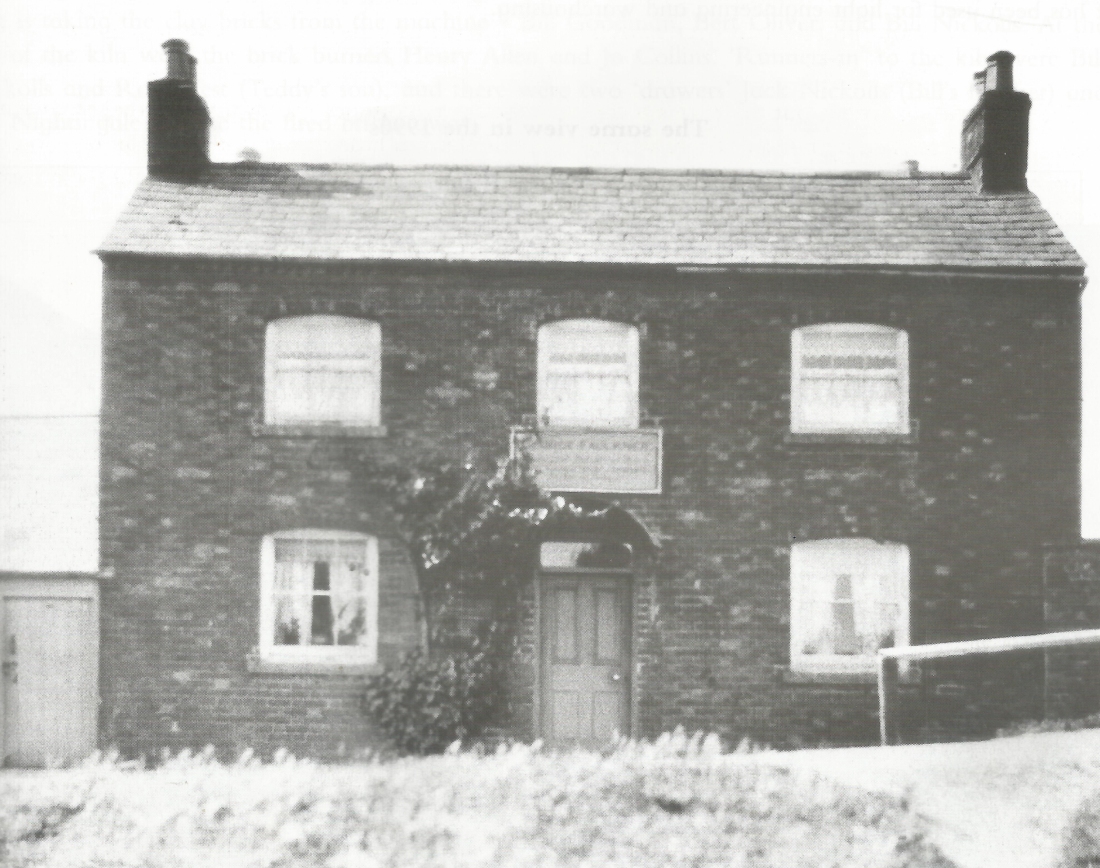 The Bricklayers Arms stood in Furnace Lane beside the canal. Like many buildings alongside the canal it had two floors at the front and three at the back. The building still exists as a private dwelling and is called Bridge Cottage. When it was modernised it was completely gutted and is now hardly recognisable as the same building because it had its top floor removed.

A small pub for local needs

Between the wars the pub was run by George Faulkner who continued to run it until the late 1930s. In the photo you can see the board above the door with the words: 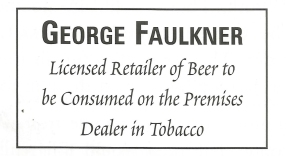 George Faulkner was grandfather to Ada Smith and Charlie Masters. Charlie remembers the pub from when it was in use. As with many buildings alongside the canal, it had two stories at the front and three at the back. The bar or tap room had bare Wooden boards with two or three tables and a handful of chairs. One of the tables was marked out for shove-halfpenny. There was no bar as such. When you wanted a beer the landlord had to go down the narrow steps to the cellar and fetch it in a jug directly from the barrel. The beer barrels were delivered by motor lorry and came from Phipps brewery in Northampton.

The pub had no water, but there was a tap at the railway cottages just down the road from where water could be fetched by bucket. There was no real toilet, just a little shelter with a drain, but no door. There was however a traditional oven heated by faggots. Some of the local people brought their Sunday roasts and Yorkshire puddings to be cooked in it. 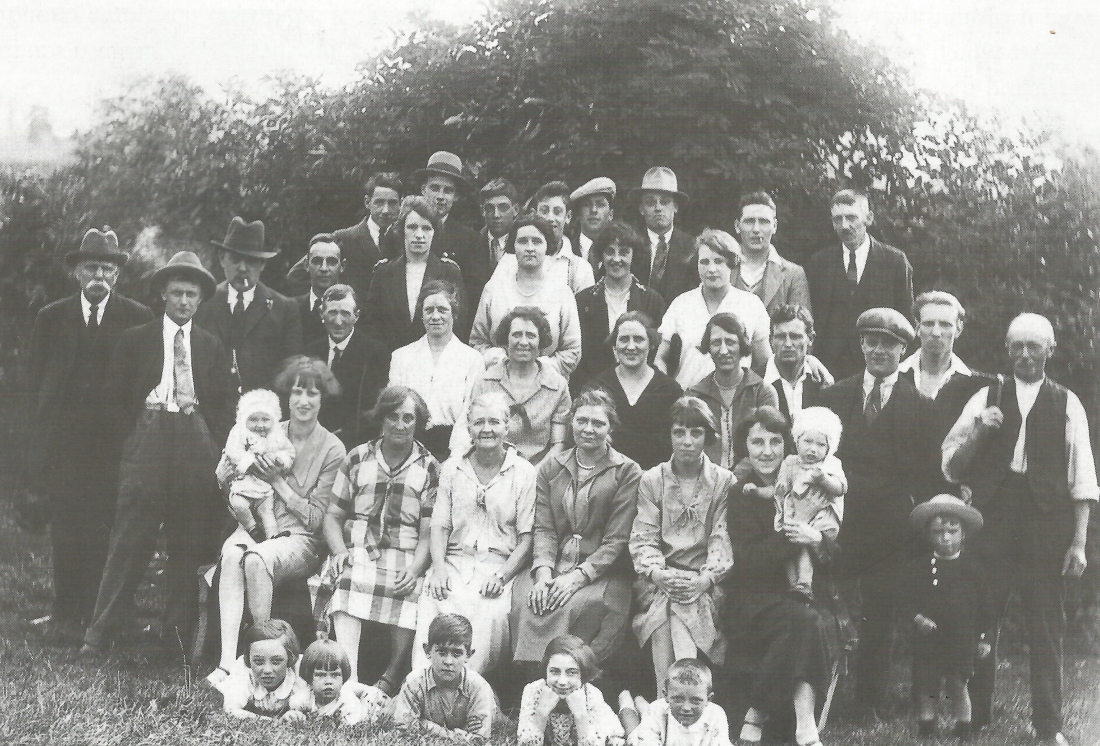 The man on the far right is George Faulkner.
The small boy beside him is his grandson Charlie Masters who lent this photograph.

At that time the pub catered mainly for the brickyard workers. The brickyard with its coal-ﬁred kilns was warm work and so the pub was often opened for a short time at around 6.30 in the morning for the workers to buy beer to take to work. They would also go there at lunchtime and after work to quench their thirsts. Bill Nickolls who worked at the brickworks recalls that the beer was 4d per pint and that they sometimes played skittles. There was also fun in the evenings. Charlie remembers how Bill Nickolls’ mother used to carry a gramophone up to the pub to play music on Saturday nights.

Sometimes during the summer months a group of people from St James End in Northampton came by bus for a day’s ﬁshing on the canal. The men would ﬁsh while the women sat on the grass and chatted. They brought picnics and drank beer from the pub. There was a piano which would be man- handled out of the building so that they could have a sing-song in the sunshine. The photograph here shows the group from one of these trips. On the far left is George Faulkner, and the small boy beside him is his grandson Charlie Masters who provided much of the information in this article.

To the left of the main building was a hay barn. Underneath this at the back of the house was stabling for six or eight horses. The horses were stabled overnight by the boat people for which George Faulkner charged about 6d. In the hay barn above were three holes at either end through which the hay could be dropped through to the horses below. Sometimes the hay was cleared out and the barn was used as a function room. Charlie’s sister Ada and John Smith had their wedding reception in this room. To the left of the barn was a wall which was built of clinker from the Furnaces. This wall is still there.

George Faulkner also ran a coal business. The coal came by railway to Weedon and then on the siding in the brickyard. He stored the coal beside the pub in the yard where Tarrys now operate and delivered it around the village by horse and cart. There was a small weighbridge, just large enough for a small cart which was used to weigh the coal, and sometimes also sand which came from a sandpit in a field behind the yard.

One of the visitors to the Bricklayers Arms was Little Tommy (Harris?). He was a shoemaker. If you wanted some shoes or boots he took all the measurements and two or three weeks later he returned with the finished article. He sometimes came to the village on Sundays. He took the bus from Northampton to Weedon and did some business there. He then walked along the A5 to the Bricklayers Arms where he bought eggs from Mrs Faulkner. He wrapped them up individually in paper and put them in his gladstone bag. On one occasion he dropped one on the ground and it broke. He asked Mrs Faulkner for a spoon and ate it from the ground so as not to waste it. He then walked on into the village and did some business there before taking the last bus back to Northampton.

The sale of the pub

Since the opening of the two furnaces in the 1860s the Furnace Lane area had been a hive of industry. Both the furnaces and the Brickworks were hot, thirsty work and the pub had for many years serviced the needs of the workers. There was also during this period much canal traffic. However by the time the Brickworks closed in the late 1930s there was little work left in that part of the village. So after sixty years or more the pub ﬁnally closed. Phipps offered to sell the house and land to George Faulkner for £100 but he didn’t take up the offer because he couldn’t afford it. And in any case it was time for him to retire.

In 1950 Phipps Brewery sold the house to Fred Tarry. Fred Tarry, who lived in Bugbrooke, had returned from the First World War, but couldn’t find employment, so in 1922 he set up a coal business in his home village of Bugbrooke. George Faulkner had already run a small coal business from the Bricklayers Arms, so when Phipps sold the building in 1950 it gave Fred Tarry a chance to expand his business to Heyford.

In 1980 the house, which is now called Bridge Cottage, was converted to its present structure. It had originally had two roofs which met in a gulley in the centre. It was almost as though the back half had been added later because the brickwork of the front and back halves was not bonded together. The supporting wall between the two halves was damp from where the gulley couldn’t cope with the volume of water in heavy rainfall. So in 1979/ 80 some serious repair work had to take place. The house was totally gutted, with only the four outside walls left standing. The top storey was removed, a new roof was built, and the cellars below, which had been almost windowless (like the black hole of Calcutta) were converted to living accommodation.

Even today the coal business continues to be run from this house by Frank Higginbottom, his wife Thelma (Fred Tarry’s daughter) and their son Richard.