The semi-detached dormer houses in Church Lane were built by Adkins and Shaw in the late 1960’s. After our wedding in 1967, Tony and I moved into No. 4 which was bought for the princely sum of £3,295. At that time most of the occupants of these houses were like us, newlyweds or not long married with young children. The land on which the houses were built had been owned by a Mr Potter whose widow lived at No. 3. The builders had not been able to develop the rest of the field because it was too low to support a sewer which is why the houses have long gardens.

At that time, the late Dennis Clarke who lived at the old bakery in Furnace Lane had a van from which he used to come round the village selling vegetables, fruit and fresh fish. He would park up in Church Lane and firstly visit Mrs Potter who was elderly and not able to walk too well. She in turn would have a cup of tea ready for him and so they would sit and chat and chat. In the meantime, all the potential customers were either waiting patiently or not so patiently for Dennis to appear. We became used to this routine and did not wait at the van unless we too wanted a chat but would keep checking to see if Dennis had appeared. But despite the wait, it was worth it just alone for the hand sized pieces of Plaice he sold, which were delicious steamed and loved by our children. Happy days indeed.

Thomas Faulkner was born in 1839 and died in 1917 at the age of 78. He was undoubtedly an influential member of the Heyford community. He was a baker by trade, he was one of the early chairmen of the parish council, and for fifty years he ran the Methodist chapel. On his death the Northampton Mercury printed that ‘his genial manner, kindly heart, ready sympathy, and active interest in all local and social matters, gained for him the respect, admiration and popularity of all with whom he came into contact, and his death will be mourned by a large circle of sympathisers.’ 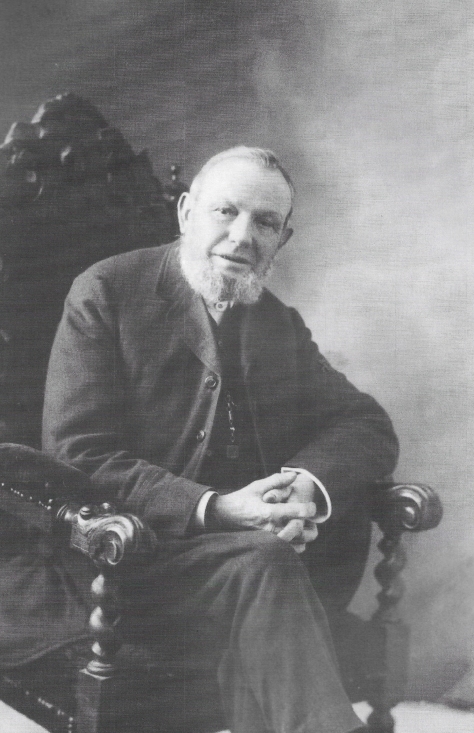 An interview with Thomas Faulkner
In 1911, shortly after his golden wedding anniversary, the Mercury published an interview with him. That interview gives a wonderful insight into his life in the language of the day and is reprinted here with the kind permission of the Northampton Mercury.

From the Northampton Mercury, Friday 29th December, 1911
On Christmas Day Mr and Mrs T.G. Faulkner of Lower Heyford celebrated their golden wedding. For it was on Christmas Day 1861 Mr Faulkner fetched his bride from Abthorpe. “We were married at Caldecott” Mr Faulkner told a Mercury representative. “The Wesleyan chapel there was the nearest place to Abthorpe licensed for marriage in those days, and as we were Dissenters we preferred to be married at chapel, even at the cost of a little inconvenience.”

“I was born at Heyford and have lived here all my life. My first work was on a farm at threepence a day. Later I went in for shoe work. In those days many of us in Heyford got work to do from Northampton. I worked for Henry Marshall and also for Bostocks. We walked into Northampton to take our work in. It took all one’s time to earn 18s. I should say 16s was the average and you didn’t do that with the eight hour day. In those days Heyford was more prosperous though than now. There were two furnaces to give a lot of employment.”

“You gave up shoemaking?”

“Yes and I took up a bakers business. A bakehouse had long been unused and we rented it. I stuck to that ‘till my son took it over some years ago. Now I help him a good bit though.”

“What was the price of bread then?”

“Eightpence the quartern (4lb) loaf. I have known the price as low as threepence halfpenny on a contract. I can remember when people used to buy ‘sharps’ from us to make their own bread. The high price was not so good for bakers as the lower. We had to pay so much for flour and then of course we sold a good deal less. The reason bread was so dear at first I believe was bad harvests and a war.”

Mr Faulkner had been prominently associated with the public and religious life of the village. A staunch Liberal in politics he has always taken an active part in the general elections, and to him the Earl Spencer is still the ‘Honourable Robert’ of the seventies and eighties. “Oh yes” he said, “we had lively times but very little bitterness. I have always got on well with the Conservatives and with the Church people even though we did differ.”

A member of the Parish Council and one of the School Managers, Mr Faulkner has done much good work for his native village. He has also been a prominent member of the AOF which he joined a few weeks after his marriage. For some years he was secretary to his lodge, and has held the office of treasurer for thirty years and more. Many times he has been a delegate at the High Court and has passed the chairs of the Northampton and Wellingborough District.