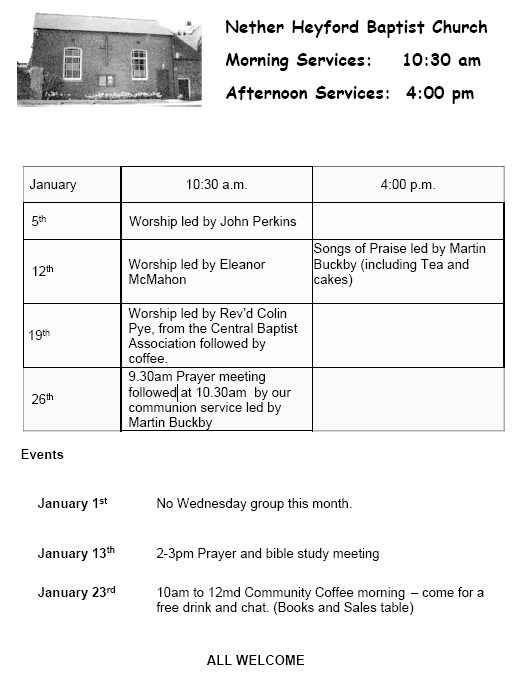 Midweek Communions are held weekly on Wednesdays, 9.30am at Heyford and Thursdays, 10am at Flore, – all are welcome (Not Wednesday 1st January)

Prayer During January we shall be praying for people living in Church Lane and Weedon Rd in Heyford, Spring Lane and Russell Rise in Flore, Francis Row in Upper Stowe and the Stables and Coach House in Brockhall. 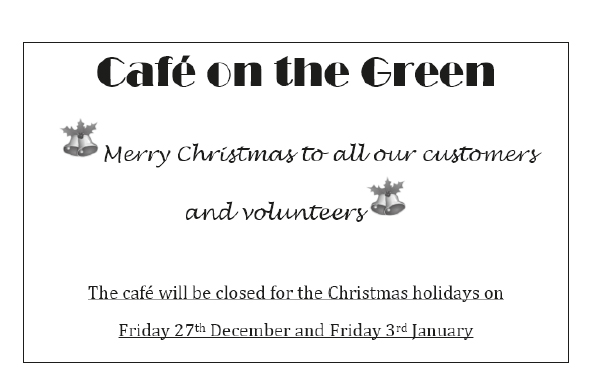 Growing up in Nether Heyford

I was born at No 3 Furnace Lane in 1946 and lived there with my patents until 1969 when I got married. My father was the eldest of 7 children in the Collins family, living at ‘Wharf Farm’, Furnace Lane where my aunty still lives. Lower Heyford, as it was known then, changes its name in later years because the village was often mistaken for Lower and Upper Heyford in Oxfordshire, where the air force is based.

My mother originated from Harpole, and she met my father at the ‘Heyford Feast’ and got married, living in Heyford for the rest of their lives. Heyford Feast was a long standing event. It always fell on the 11th October each year and consisted of a large fair on the village green with Swing Boats, Carousels and Dodgem cars, not to mention Roll the Ball, Shooting and many other amusements. Also, lots of stalls selling candy floss, hot dogs mint humbugs etc. The fair was run by the Abbott and Billing families and over the years we got to know them well and while in the village, their children attended our local school. I went to Heyford School when I was five years old and was educated by Mr & Mrs Woods, then by Mr & Mrs Warr. The school bell was rung twice a day at 9.00am and 1.00pm just as it is today. Although other nearby villages had their own feast dates, Heyford was the largest because of our fabulous village green. People used to come from miles around and Tom Rolfe, who ran the Foresters Arms, opened up the club room for dancing which went on late into the night.

We also had a very good Youth Club which was held in the village hall. I was club secretary and my friend Lynn was treasurer. The fee was 2 old pennies per evening and we often had an awful job getting the money in. We had regular dances, often on a Friday night with live groups. People came from all the nearby villages and Northampton and they proved to be very popular. As club secretary, I had a hand in arranging these events.

I have many things I remember about life in the village. A lot of my leisure time was spent with my cousins on my grandmothers farm, especially in the school holidays. My dad’s youngest brother, Reg and his wife Joan, helped my Grandmother on the farm and lived there with their four children. In the school holidays, my two eldest cousins and I would help out ad played for hours in the hay barns and fished in the nearby canal. The railway line ran next to the farm and we would go into the signal box with the signalman and watch the trains going by. If we were lucky, he would let us pull the levers to change the signal.

Haymaking was always good fun too. My uncle would put the bales on his trailer which was then hitched up to the tractor and us children would stack them in neat rows, getting higher and higher as we went. Then we would sit on the top with my uncles towing the load back to the farm. (This would not be allowed nowadays).

My father, Arthur worked at the Northampton Power station as a fitter until he retired. He was one of the many volunteers who helped build the village hall, giving up their free time whenever they were able to.

Also, in the school holidays I would go with my mother fruit picking on Mr Beck’s farm. He would come into the village with his tractor and trailer to pick up the many helpers (mostly women) to take back to pick the fruit off his many currant bushes and other fruits. At the end of the day he would transport everyone back into the village. He lived on the large estate when New Creation farm is today.

When my parents married, they lived in a small rented house with no amenities, no running water and an outside toilet. One of my lasting memories of this, is having local men come round on a regular basis with the ‘Muck Cart’ to empty the bucket. (No such luxury of a flush toilet). On one occasion I was sitting on the toilet as a young child and they arrived to perform this delightful deed. I shouted through the door, “I haven’t finished yet”. Back came a very calm reply from one of the men, “It’s alright my duck, I can wait”.

Mr Faulkner, the baker delivered the loaves of bread to various houses. It was always in the evening as he baked the bread first in Northampton. He would sometimes stop and chat and on many occasions my mother used to say, “When is he coming as I want to go to bed”. Suddenly the kitchen door would open, and a hand and arm would appear clutching the bread, put it on a chair by the side of the door and say “Coo-Eee” and he was gone in a flash. Thus, he was known as Coo-Eee The Baker. At Christmas time, it was even later, as many customers gave him a drink or a mince pie, and he would be a little worse for wear when he arrived.

Eventually, my parents were able to buy the house we lived in together with the one next door, after John Earl (who owned the property) died. They had the two knocked into one and modernised, and it still stands today.

After I left school, I went to work at the Express Lift Co in the office. This is where I met my husband, Bob. We got married in 1969 in the Baptist Chapel and bought a new house in Rolfe Crescent, which is on the Wilson Estate where we had two children, Christopher and Anna. Twelve years later we moved to our present home in the centre of the village, where we live today. Both our children are now married, and we have four delightful grandchildren, two of which attend Heyford School. This makes them the fourth generation in my family to go there.

I have lots of fond memories of living in this wonderful village, which has grown tremendously over the years with the Village Green as its heart. School sports, football and cricket matches were played on the green before the arrival of the playing fields, which all the village folk would turn out to watch regularly. John Smith’s cows would often escape and go charging over the green with John running frantically behind. Some people now refer to the green today as the park, but to us oldies, it will always remain our beloved village green.

I hope you’ve enjoyed my little visit down memory lane as much as I have.

Letter published in The Prattler – December 2019 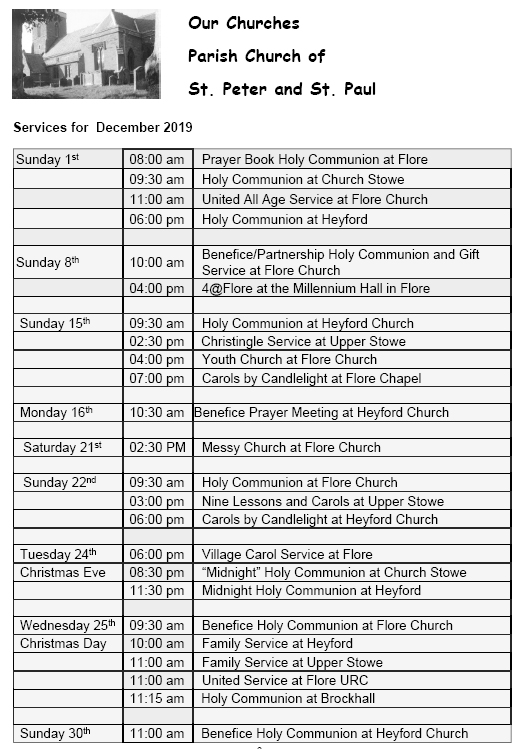 Midweek Communions are held weekly on Wednesdays, 9.30am at Heyford and Thursdays, 10am at Flore, all welcome. (Not Wednesday 25th or Thursday 26th December)

Prayer During December we shall be praying for people living in Winston Close, Roberts Field and Ridgeway Furlong in Heyford, Nether Lane and Thornton Close in Flore, The Green in Church Stowe and The Old Rectory, Rose Cottage and Western Cottage in Brockhall.

The Prattler is run by an active voluntary committee comprising of Sue Boutle, Christine Watts, Vicki Hamblin, Jez Wilson, Nick Essex, Richard Musson and Mary Rice. If you would like to submit articles or have any suggestions for future issues, please get in touch.

The Newspaper is supported by donations from the Parish Council, the Parish Church, the Baptist Church, Heyford W.I., Heyford Garden Club, Heyford Singers, the Bowls Club, the Village Hall and Heyford Picturedrome as well as the advertisers.

Thanks are also due to the volunteers who distribute it every month.

Please note that this issue covers December and January. The next issue will be
available on 1 February 2020.

In the meantime, we would like to wish everyone a very Merry Christmas and a
Happy New Year.