The latests Tweets from the Nether Heyford Police Community Support Officer Matt Taylor are now in our Neighbourhood Watch section for easy reference.

“The police are public, and the public are the police. The Police being the only members of the public paid to give full-time attention to duties that are incumbent of every citizen in the interest of community welfare and existence.”

I am therefore looking for volunteers aged between 18-80 who would be willing to support me by patrolling the villages as part of a Streetwatch scheme.

In the absence of any cricket until further notice, the club have been taking a trip down memory lane during April, sharing scorecard and match details of games of the last 25 or so years. The earliest scorebook we have is from the 1993 season, which would have been one the first seasons hosting cricket at the Playing Fields. A local derby attracted our attention. Heyford CC hosted Weedon CC, who folded many years ago. Bowling first, Weedon were bowled out for 134, with Chris Peck leading the way with the ball with an excellent 4-14 and club President Alex Kirkbride taking 2-27. It’s great that Chris is still turning out regularly for Heyford on a Saturday afternoon. In response, Jeremy Rice (41) and Pete Rice (28) set the chase up, and Dave Payne’s (29*) useful contribution
ensured that Heyford ran out victors by 4 wickets.

A number of the players in this game are still involved with the club, some playing occasionally and others supporting in the club’s activities. I’m sure if you’d have told this lot that in 2020 Heyford CC would have 3 senior teams, a thriving junior section, awarding-winning grounds and a not-to-be-missed end of season tour, they would be pleasantly surprised.

Coronavirus Cricket
The junior cricketers at Heyford CC were busy completing a Coronavirus Cricket challenge over Easter! We’ve created a fun video of 20 children and coaches playing cricket with a difference during the lock-down. With a little bit of trickery on the computer we’ve made it look like the children are bowling a ball to themselves, hitting it up into the air, and then catching themselves out! Check out the News page on our website for the full video.

Bonus Ball
A full list of Bonus Ball winners can be found on the ‘News’ pages of our website.
The March 2020 winners were as follows:

We hope to see you soon, but in the meantime all the very best to our loyal supporters, volunteers and everyone in the village.

More details about Heyford Cricket Club can be found on our website or via social media where we can be found on both Facebook and Twitter. If you would like to get in touch you can also email us.

Our last three matches in the ‘WARDINGTON LEAGUE’ have been very successful. A hard match at Moreton Pinkney saw us win on one mat and lose on the other. Unfortunately we lost on the final aggregate score. However a really good win at home to Middleton Cheney on both mats. This led to the final aggregate score in our favour by the magnificent score of 74-8.

The ‘LADIES PAIRS’ was played on Saturday 14th March. The knock-out matches produced some really good bowling. An excellent and close final saw Liz Davison and Pauline Thackray beat Eileen Everard and Jean Cullin by the score of 5-4.

Good support has once again been maintained on our Wednesday bowling sessions.

I always knew that nuclear bunker I built in the 1960s would come in handy one day. I’ve promised my wife that this crisis will all be over by the time of our wedding anniversary on 18th June, but when I hear of national organisations suspending all meetings for four months, I fear that my deadline may be a trifle optimistic.

This is my first missive for The Prattler this calendar year, and it should have been telling you of the dates for the enrolment night, the fish and chip supper, the spring quiz, the working party on the green, and fixtures. Instead all I can report is they are all cancelled. This leaves the residents of Heyford free to spring clean their houses and make their gardens immaculate. At the end of the pandemic I will be round to check.

In the meantime, take care of yourselves and your loved ones.

PS Don’t go to the shops specially to buy us an anniversary card. Use one of the ones you panic bought at the start of the pandemic. They’re up in the loft. On top of the toilet rolls.

A good turnout of 21 players contested the ‘THE DAVID JULAND PRESIDENTS CUP’ on Saturday 8th February. The eventual winners after a hard fought final were Jean Cullin, John Dunkley and Peter McClean over Gill Guglielmi, Barry Cole and Roger Schofield by a score of 9 to 3.

An excellent result in our ‘WARDINGTON LEAGUE’ match was a win on both mats over Boddington with a combined winning score of 57 to 10.

The ‘LADIES PAIRS’ Competition will be played on Saturday 14th March at 1pm for 1.30pm. Entrants as usual via the notice boards.

Members’ support has been good in maintaining attendances at our Wednesday bowling sessions.

On 25th August 2003, the team assembled under the leadership of Christine Metcalfe, the Village Hall Chairman. It was split into two groups, door and windows were fitted by Dave Juland, who was also the Foreman., Brian May, Ralph Faulkner and Hughie Taylor. Tea was made and served by Ray Metcalfe who was in trouble if late. Cladding and insulation was fitted by Jim Williamson and Tony Wright assisted by Sally Sargent. Everyone brought sandwiches for lunch apart from Ralph who went home for a cooked meal. Very welcome cakes were provided by Jean Spokes, Rene Gilkes, Mary Hyde and Maureen Wright.

The old cladding was removed, and insulation batts cut to size and fitted followed by the new cladding. Peter Perkin kindly left a trailer every morning and took away the rubbish at night. Joan Juland looked after the curtains. The working day was 9am to 5:30-6:00 pm Monday to Friday. By the end of the first week, seven windows had been fitted and clad. The second week saw the remaining windows fitted and the cladding completed. Beading was fitted around the windows on the inside and on the Friday, the job was finished when Joan Juland and Marion Williamson re-hung the curtains. All agreed it was a most satisfying project.

Letter published in The Prattler – February 2020

The Christmas fun night turned out to be another hilarious bowling occasion. A good turnout was treated to a very enjoyable evening.

2020 will see the start of another year’s bowling competitions. Last year they produced some excellent bowling. Competition was keen, making it hard to win a trophy. Our first competition, ‘THE DAVE JULAND PRESIDENTS CUP’ will be played on the 8th February, 1pm for 1.30pm.

January 6th saw Heyford entertain Syresham in a Wardington League match. An enjoyable competition saw Heyford win on both mats. This enabled us to pick up 4 points from this win. Our next match is away at Middleton Cheney on the evening of 23rd January.

It would be nice to say thank you to Ray and Rosemary (EVENING) and Sandy (AFTERNOON) for all their hard work throughout 2019 in helping to maintain a thriving INDOOR BOWLING SECTION. Also a thank you to all our members for making 2019 a successful and happy year for the IBC. Good luck to all our bowlers in the coming year.

The Home Guards met twice a week in the yard of the Foresters Arms, where they had their stores. The Commanding Officer was Charlie Highfield, chosen because of his army career. 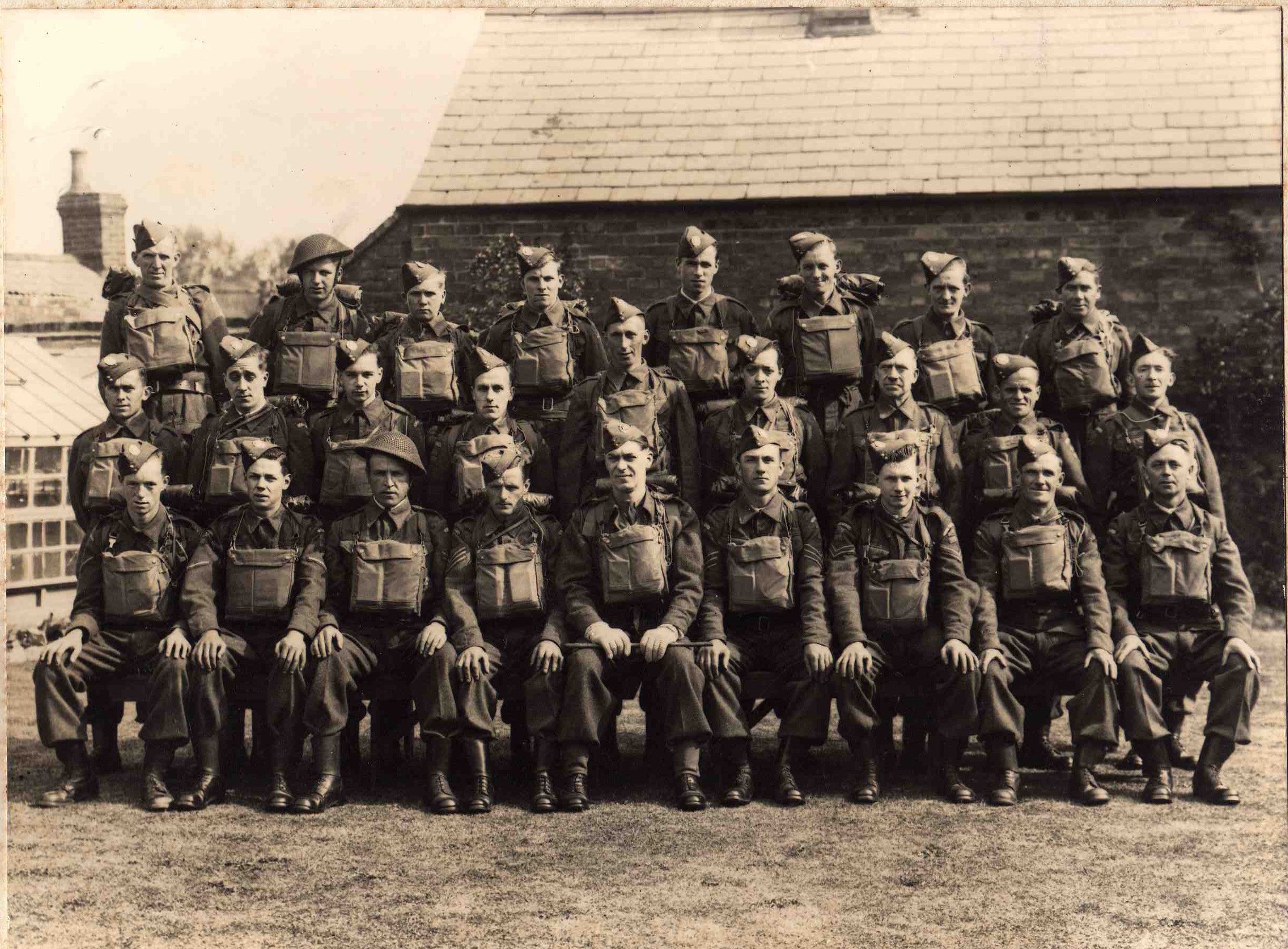 Please contact The Prattler if you can confirm any of the name spellings or nicknames. Also if you have any information on the Home Guard activities or any memories to share then send them in and we can update this page.

The indoor bowls section has been involved in a number of competitions during November. It was the start of the Wardington League winter games. Our first game was at home against the present champions Moreton Pinkney. Unfortunately we lost on both mats, though on one it went to the very last end. Our second match was away at Boddington. This proved to be a very good side and we were beaten on both mats. Never the less both games were enjoyed by all and it is very nice to
play people we would not normally play against.

The ladies versus the men proved a great laugh and played in a wonderful atmosphere. All games were played with a great spirit and of course both sides wanted to win. However after a fantastic afternoon of bowling and fun, the men were the eventual winners. We can once more look forward to the game next year. This year our annual Xmas fun night will be held on Wednesday evening 18th December.

After a very hard fought game the ‘BENCO SHIELD’ was won by Graham Drake and Jean Cullin. This was our last indoor club competition of the season, but there will be lots of ‘WARDINGTON LEAGUE’ games to look forward to during the winter months.