There has presumably been baking in Heyford ever since there has been a settlement here. Both Heyford and Heyford Mill are mentioned in the Domesday Book, and the proximity of the mill meant that there was always a local source of ﬂour.

There are several records of baking in the village during the 1700’s and 1800’s:
– The Militia list of 1777 mentions Henry Burch and Robert Burch as Bakers.
– The 1841 Census lists John James, Joseph Claridge and John Cole.
– The Kelly’s directories in the 1800’s show several bakers:

Until the first world war the building on the corner of Furnace Lane and Weedon Road (now Tops the hairdressers) was the Bakers Arms pub, so called because the landlord Mr Pinnock had a small oven for baking bread. A small oven was also discovered in the old post office building when it was demolished in the early 1950’s.

The Faulkner family
But from the 1890’s to the 1940’s most of the village’s baking was done by Thomas Faulkner and his family. He had two sons, Walter and Wesley, and ﬁve daughters. Much of the following information came from his great grandson Dennis Clarke.

The Faulkner family ran two bakehouses. The first was in the red brick house (now number 19 Church Street) owned by Thomas Faulkner. He ran it with his son-in-law, Fred Furniss. They were from staunch Methodist families well respected in the village. They didn’t drink or smoke. Thomas Faulkner was for many years a lay preacher at the Methodist chapel, and was also the ﬁrst chairman of the Parish Council.

Then some time during the first world war he established a second bakehouse with a larger oven in the building which is now number 22 Furnace Lane. One of the reasons for needing a larger bakehouse was that he supplied bread to the Weedon Barracks. It was run by his son Wesley. This became the main bakery in the village and was active for more than 30 years. His other son Walter had a bakery in Northampton.

The flour room was upstairs and the flour was fed down to the bakery via a chute. The dough was made up the night before, kneaded into loaves, laid in tins and allowed to rise. The oven was lit between three and four in the morning with faggots of wood. When it was the right temperature, the ashes were removed and the bread put in. The oven, which was well insulated, kept warm for several hours, but even so it was an inaccurate science and it wasn’t unusual for a loaf of bread to be not quite cooked in the middle.

Sunday roasts
Although the oven was used mainly for baking bread, it was also used on Sundays to cook the roasts. The villagers would bring their joints and Yorkshire puddings to be cooked while they were at church or chapel. You would put the joint on a trivet in a baking tray with the yorkshire pudding mix underneath. The fat from the meat dropped into the yorkshire pudding mix as it cooked.  Wesley Faulkner charged 2d for this service. Bill Kingston remembers sitting on the flour bin waiting for the joint to cook. Sometimes it was difficult to recognise your own joint. Mrs Dorothy Kingston remembers as a girl picking up their joint on one occasion only to be told by her mother when she got home that it was somebody else’s! When the joints came out, the cakes went in.

The bakehouse in Furnace Lane also had a little shop which sold not just bread and cakes, but also sweets and cigarettes. In the back yard they kept pigs and chickens as most people did. Outside the back door was a well and a handpump which is still there today. They also kept a pony and trap which Wesley used for making deliveries in the evenings to Stowe, Farthingstone and Litchborough, often not returning until late in the evening. The pony and trap were later replaced by a motorised van.

Wesley Faulkner pictured with his delivery van in the 1930’s

Changing times
The bakehouse continued to run until around 1945. However, by this time larger bakeries were being established in town and cheaper mass-produced bread and cakes were becoming readily available through the other village shops.

For some years after this, bread was delivered to the Village by ‘Cooey’ Faulkner, the ‘Midnight Baker’. He was Ruskin, the son of Walter who had a bakery in Abington Avenue in Northampton.  He got his nickname because he delivered bread, often late in the evening and announced his presence by calling “Cooey!” Some people left baskets hanging outside their houses for him to leave the bread if he was very late. Part of the reason for his lateness was that he was always read to accept a cup of tea if offered one! Today the house is occupied by Dennis Clarke,a great nephew of Fred Furniss, and great grandson of Thomas Faulkner. The oven, though no longer used is still in place.

From the 1940’s until the 1980’s no bread baking took place in the village. We had moved into times of mass—production and faster road systems, so most of the bread came from large bakeries outside the village. The installation of gas, and then electricity meant that most families the 1950’s had small ovens in their own modernised kitchen.

The Bake-house in Furnace Lane 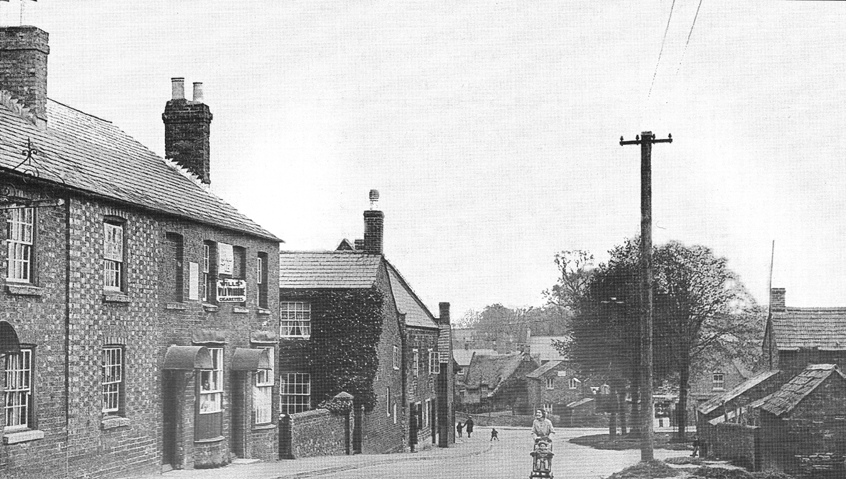 This photograph looks towards the bottom of Furnace Lane and shows the old bake-house on the left hand side. To the left of this on the far left hand side of the picture is the building previously used as the King William pub. You can see here the frame which held the pub sign. Opposite the end of Furnace Lane you can see the little building which was the original Methodist chapel built in 1838 with the plaque above the upstairs windows. To the right of this is the old thatched post office, demolished in the 1950s, and to the left is the thatched cottage occupied by Mrs Anne Clarke, Heyford’s midwife for many years, which was demolished in 1969.

Heyford Patisserie
In 1985 the Heyford Patisserie was opened next to the butchers. The business had been started two years earlier by Wendy Allen who began baking at home. Her first order was from Carol at the Olde Sun to produce pies for bar meals. Then word got around, the number of customers grew, and the business became too big to run from home. At around that time, Malcolm Tarbox (the butcher) acquired the buildings in that block. The old slaughterhouse at the end of the block was renovated and converted into the present patisserie building. On 3rd November 1985 Wendy moved into her new patisserie which gave her not only much better baking facilities, but also a retail outlet. So began a service which was much needed in a village which had doubled in size since the 1950s. Although the bread came from Tees Bakery in Grafton Street, Northampton, all the pies, quiches, and puddings were baked on the premises.

Then after 11 years of long hours, six days a Week, Wendy decided to retire and the business was taken over in 1996 by Lesley Parker who continues to run it in the same way today.