The magniﬁcent house at Heyford Hills was built originally for the owner of Heyford Ironworks. In the late 1800’s it was owned by John Hardy, a farmer. During the 1940’s it was occupied by Major Campbell. In the late 1940’s, Mr Beck, a gentleman farmer came from Herefordshire to Heyford Hills and established a fruit farm for his semi retirement.

He planted 12 acres of fruit on the side of the hill to the right of the drive. He grew apples, plums, gooseberries and blackcurrants. It was a quite a good site because although it wasn’t south facing it was largely frost free and enjoyed the afternoon sun.

He employed local people to look after the fruit, doing pruning, general gardening duties and picking. Three people who worked there regularly were Mrs Butcher, Mrs Lilley and Mrs Sargeant.  Mrs Butcher, who provided much of the information for this article, worked there for 24 years. 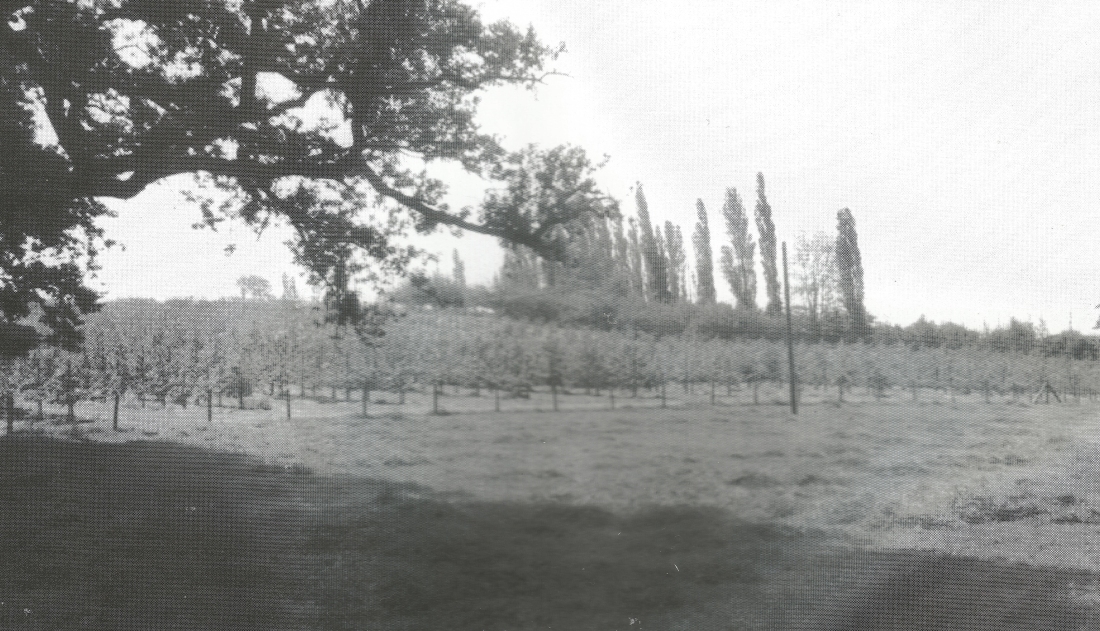 During the picking season he employed thirty or forty local people. He sent a tractor and trailer into the village to collect them, mostly but often children as well because much of the picking was done during the holidays. The fruit was collected in small tubs, then weighed and put into 50 lb wooden barrels. The pay was a penny—farthing for gooseberries and twopence-halfpenny per lb for blackcurrants. It wasn’t much, but it provided an opportunity for local people to spend many happy hours picking and chatting amongst the fruit bushes in the warmth of the afternoon sunshine. Mrs Butcher remembers on one occasion picking 568 lbs of gooseberries in 6 hours. It was a messy job with stains from the blackcurrants and scratches the gooseberry thorns, and at local jumble sales people went searching for cotton gloves to protect their hands.

They used gooseberry graders to sort the fruit. The big fruit was sold locally to wholesalers as whole fruit, and the smaller ones were sent to a cannery.

When the fruit was ready to be taken away it would be loaded into bushel boxes (large wooden boxes with a handle at each end) and taken away by lorry to commercial processors in Cambridge and Stratford to be canned or to make drinks and jam.

Mr Beck himself was a wealthy man. He had been a pilot in the ﬁrst world war and still had the tail of a German plane that he’d shot down. He had some property in South Africa to which he returned each year and to which he eventually retired in 1975. He enjoyed expensive cars and had four or ﬁve Mercedes. He hard worker and expected those around him to work hard too, but he was a real gentleman and everybody loved him. He took an active part in the village and was at various times president of the football and cricket clubs.

Mrs Beck’s interest in dog shows for which she was a judge. She employed a kennel maid and kept alsatians and beagles, many of which won prizes. She often judged the dog shows at the village fete. At ﬁrst they took over the twelve acres of orchard. They added some sows and chickens, they installed 70 bee hives, they planted potatoes, and they extended the fruit bushes right down to the drive. They later bought some other neighbouring land, together with Novelty Farm on the A5. Today they have 300 acres and run the farm as a community, both to feed themselves and to produce crops for selling commercially through their farm shop.