Lower Heyford known now as Nether Heyford is a village steeped in history. When I first moved here in October 1964 the village was quite different to what it is today.

We moved into 75 Furnace Lane, a chalet bungalow, opposite was the dairy field with a big house owned by the sisters Green. There were 2 big houses as you came down the road from the A5 on the right hand side, and a bungalow owned by Pinky Lilley on the left. From the bungalow, the field reached down to the council houses.

On our side of the road we were next to the big houses. Our houses had just been built by Mr Howe, a former constable who came from Luton. I think that there were six chalet bungalows built in all. They led down to the council houses on the right of Furnace Lane.

Coming into the centre of the village was the Green which is I’m told is the largest green in the country. Surrounding the village green were thatched houses, the Baptist chapel, school, village hall and a few houses. Opposite Furnace Lane is Church Street where I now live.

There was a shop on the corner which once was owned by Major and Mrs Blaney. Next to the shops was a house that used to be a chapel and when we moved into the village, an old thatched house was next to a bigger chapel that used to be run as a Youth Club. The shop next door was owned by Mrs Court but was run by Mrs Highfield and there was a small fish and chips place just between the chapel and the shop.

The 3 storey house next to the shop had a row of houses which are now no more and next to them was an old forge which was used later for a garage. The thatched house was beautiful and had a well with wrought iron covers just inside the entrance.

This is the true centre of Heyford.

On the road to the church, there was a bakery which used to cook the congregations Yorkshire puds while they were in church, a wheelwright, the co-op and another small shop next to the jitty and also a ladder makers as well. 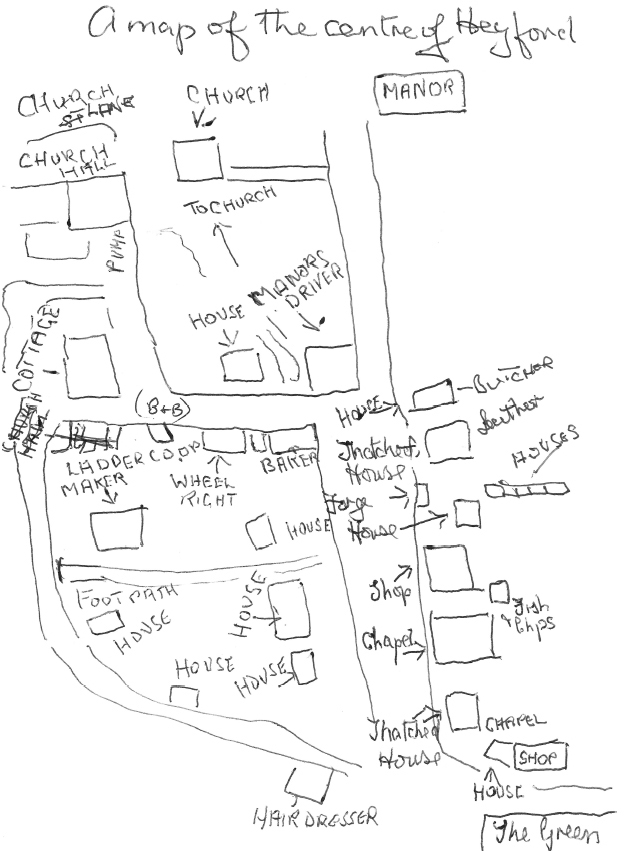